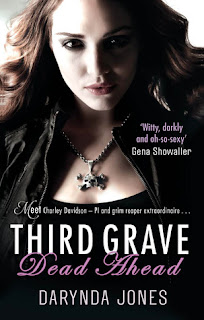 Paranormal private eye. Grim reaper extraordinaire. Whatever. Charley Davidson is back! And she's drinking copious amounts of caffeine to stay awake because every time she closes her eyes she sees him: Reyes Farrow, the part-human, part-supermodel son of Satan.


Granted she did imprison Reyes for all eternity, but how is she supposed to solve a missing-persons case, deal with an ego-driven doctor, calm her curmudgeonly dad, and take on a motorcycle gang hell-bent on murder when the devil's son just won't give up on his plan of seduction..... and revenge?


"Death comes to those who wait. And to those who don't. So either way..."
Paranormal private eye and Grim reaper extraordinaire Charley Davidson is back once again!
Dr Yost's wife has gone missing and its Charley's mission to find out what has happened and where is she?

Waheyy iv been pulled back into the series of Charley Davidson PI & GR...More talk of reyes(in the shower...Yummy ;) ) Garrett im actually starting to warm up to.This book did make me giggle at times but also made me think that reyes is yes a god but is a complete and utter idiot and creep at the same time..yes okay he is the son of satan..but really? car jack charley? make 10 oclock news? to find earl walker?

I do like the style of writing that darynda jones used and makes the story flow so easy. I feel sorry for Charley at times because even though she is the grim reaper she always seems to have stalker creepy guys who are out to murder or hurt her! I also love the little quotes at the start of each chapter, some of them made me giggle.

I would defo recommend anybody to read this Charley Davidson series because you will be laughing from start to finish and also i would love to know where Charley gets her bumper stickers & t shirts coz i could sure you use some of my own at times.tehe! a well deserved 5 stars to Darynda Jones.. Fourth Book to come out 4th Jan 2013...yes a long wait i know :(
Posted by missbookworm22 at 19:21