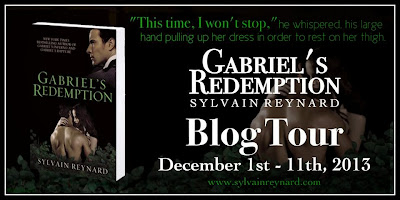 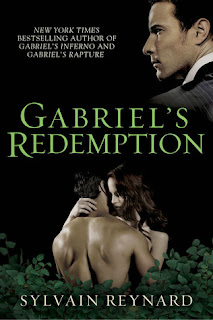 Blurb
Professor Gabriel Emerson has left his position at the University of Toronto to embark on a new life with his beloved Julianne. Together, he’s confident that they can face any challenge. And he’s eager to become a father.

But Julianne’s graduate program threatens Gabriel’s plans, as the pressures of being a student become all consuming. When she is given the honor of presenting an academic lecture at Oxford, Gabriel is forced to confront her about the subject of her presentation – research that conflicts with his own. And in Oxford, several individuals from their past appear, including an old nemesis intent on humiliating Julia and exposing one of Gabriel’s darkest secrets.

In an effort to confront his remaining demons, Gabriel begins a quest to discover more about his biological parents, beginning a chain of events that has startling repercussions for himself, Julianne, and his hope of having a family.

A wow from me! I am so grateful to be part of Sylvain Reynard's blog tour for his new book Gabriel's Redemption. This is the third book in the Gabriel's series, however ladies it also is the final book too :( boohoo yes i know tissues at the ready!
So we are following Julianne and Professor Gabriel Emerson once again in their journey of life and enjoying it together. But with always a nice happy couple life can come with old pasts come back to haunt them...

This book is just ever so superb! A hooking read that had me gripped to my Kindle always trying to grab a 10 minute break so I could carry on, As soon I started I was straight away sucked back into the lives of Gabriel && Julianne but only this time as Mr & Mrs Emerson and starting a new life as husband and wife this time.

I was so blown away by Gabriel's Redemption so much, I was hooked with every page and I really didn't want it to end. It was nice to see Julianne and Gabriel happy again in their own little newlywed bubble. Julianne started a new graduate program at Harvard but Gabriel's plans are going to threaten that but it's whether Julianne will agree or not.

If you ever wondered what happened to Paul, Christa, Professor Katherine Picton, Natalie and Simon, then don't worry they are in this book and with plenty of goings on. Christa up to her old tricks once again but not without consequences. We also find out what was written in that letter that Gabriel wrote to Julianne in Gabriel's Inferno in which she ripped up........Finallly! had been waiting ages to find out.

The best quote from the book would have to be -
“Tonight I’ll help you touch the stars. And when you fall back to earth, I promise to catch you.”

Gabriel's Redemption was definitely not a predictable book or ending, It was an amazing read in which had unpredictable things happening left right and center. I felt this book was the right time to answer unanswered things or questions that may have been running in your head after reading the first two.
And Yes there is plenty of sex scenes between the two lovers so entwined with themselves that they get a unexpected shock that does change their lives forever..the sex scenes will certainly make you blush if your reading in public.

Gabriel's Redemption is one hell of a book that is going to make you laugh with Professor Emerson's sarky comments to Julianne but also make you shed a few tears but also you wanting to stomp your feet because your annoyed with a certain person. but overall I would say this is has been the best series by far in 2013 and I have loved every single one of them books.
I am gutted there will be no more in the series but I think Dante and Beatrice will be around for a while in our hearts and minds...

I have to rate Gabriel's Redemption my rare Gold star rating which is like 5*++ if I could I would rate 1million times over hehe. I do think you all need to read these three amazing books, you will regret it otherwise.


Now is your chance to win some fab prizes now! Just follow below.
GOOD LUCK!
xox

a Rafflecopter giveaway
Posted by missbookworm22 at 20:36