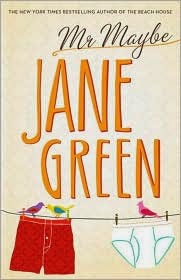 
This book is about a 27 year old girl Libby who falls for a handsome man called Nick although her dream is to be married to a rich husband who can give her everything Nick isn't one of them as he is on the dole and has a very grotty bedsit. Although Libby falls for Nick they both aren't ready for a relationship with one another so they are only seeing one another for "sex" until a night in a pub out with a friend Libby meets a very rich man called Ed who is an investment banker with a lovely house although he has the most irritating habits to Libby she still remains to be with him until family members and friends make Libby aware that she is making a big mistake with Ed.

I loved this book!!! I always check other peoples reviews out and I was outraged to see this got a 1 star. It got me hooked from page 1 just like all of Jane green's books have. I loved Libby and dont we all wish we were married to an extremely rich man? I know I wouldnt say no! however the story doesnt go to plan that way and its true that personality is better than money!!!! I hated Ed he got on my nerves with his french talking and darling this and all old fashioned words that me mum would call me as a child it got irritating! however I didnt connect with Nick straight away I hated his rude friends and thought he was just using Libby but during the story I took a warm to him and was pleased i did!

I loved the ending would have wanted to see how Ed got on but it was still really good another definate 5 stars for another jane green book!