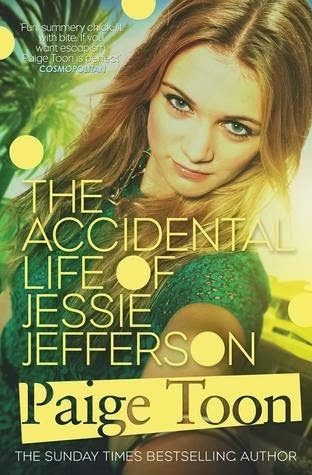 
Meet Jessie, the daughter of Johnny Jefferson, as featured in Johnny Be Good and Baby Be Mine…

My fifteenth birthday was the worst day of my life, and it's inconceivable to think that any single day in my future will ever be as bad. My mum was killed in a freak accident on her way to pick up my cake. Even when there was still no sign of her after two hours later, and my friends started to arrive at our house, it never occurred to me that she wouldn't be coming back.
That was six months ago. My mum died without telling me who my real dad was. And for a while I hated her for it. I thought she's taken the secret of my father's identity with her forever. But she didn't. Holy hell, she didn't. Because three weeks ago I found out the truth. And I'm still reeling from the shock of it. My dad is none other than Johnny Jefferson, mega famous rock star and one-time serial womaniser. And now I'm on my way to LA to meet him and his family.
My tiny little world has just got a whole lot bigger…

Yay Paige Toon is back this year with a new book! Woohoo! I was so happy & excited when I heard that Paige was bringing another book out but this time it would be her first YA novel and that it would be Johnny Jefferson's daughter Jessie's story, I couldn't wait to have my very own copy tehe! I am such a huge fan of Paige Toon's books and I Loved this one just as much.
I have to thank the lovely Catherine Ward @ Simon & Schuster for my copy of Jessie's story and it has also been signed now by the lovely Paige herself so i'm even happier hehe!So we meet Jessie Jefferson a 15 year old teenage who when it was her birthday tragically lost her mum to a freak accident while collecting her birthday cake so now she lives with her step dad/ teacher Stu and is so frustrated as her mum never told her who her real father was until Stu her step dad told her that her real dad is none other the Johnny Jefferson..yes the handsome rockstar... Jessie's life soon takes a change and she feels so excited that she knows her real dad finally.I just loved every single page of this book! At first I was a bit worried incase I didn't enjoy it being a YA Novel...but how could I not love it? It's written by the fabulous Paige Toon but also we got see a different side to Johnny and also get Jessie's side of things which was great. The cover of The Accidental Life of Jessie Jefferson is completely different to any of Paige's books but I suppose with her looking for a Younger age reader this cover would certainly appeal to a younger adult. I loved the cover so much!I always love the style of writing with Paige and even with this book I soon got sucked in and couldn't put the book down. It felt a bit strange reading from a 15 year old's mind but you soon get stuck in and her reaction to her who real dad is was just priceless! I loved that we got to read about Johnny & Meg again Yay...I had missed them :)Although I felt at first we saw a different side to meg, her being a stand offish towards Jessie I felt was a bit mean but I suppose anyone in that sort of situation would find it awkward. I did feel they could of been a bit nicer to Jessie but hey who knows in the next book hehe.I loved all the characters in this book and I felt a bit sorry for Step dad Stu as he feels Jessie will probably forget about him and his plain and simple life but I doubt Jessie would ever do that although she was a bit of a handful at times. For true fans of Paige Toon's books I would say go grab this book, read it as you are going to love it just as much as the rest of her books. I am so excited that we will have two Paige Toon's books out every year now hehe!I cannot wait to read more from Jessie for defo!
The Accidental Life of Jessie Jefferson completely deserves a 5 star rating or even so my rare gold star rating..hell yes for being such wonderfully written, a roller-coaster of highs & lows & just damn right brilliant!
Thank you once again Paige for writing such a fab story!