City Of Bones (The Mortal Instruments #1) By Cassandra Clare 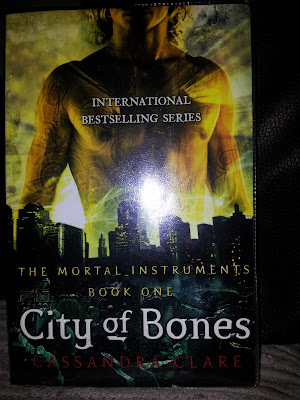 When Clary Fray heads out to the Pandemonium Club in New York City, she hardly expects to witness a murder. Much less a murder committed by three teenagers covered in odd markings. This is Clary's first meeting with the shadowhunters, warriors dedicated to ridding the earth of demons -- and keeping the odd werewolves and vampires in line. It's also her first meeting with gorgeous, golden-haired Jace. Within twenty-four hours Clary is pulled into Jace's world with a vengeance, when her mother disappears and Clary herself is attacked by a demon. But why would demons be interested in an ordinary mundane like Clary? And how did she suddenly get the Sight? The Shadowhunters would like to know....

First thing is first, If your big fans of The Twilight Series then you are going to love this series, You will be hooked after reading this book and will be hunting for the next books I promise you. I think these books are going to be a love or a hate em sort of series..It all depends on the type of book series your after.
It is a girl and boy meet and fall in love sort of story but also has plenty of action and things going around that has you flicking every page ever so quickly taking the whole story in and being so engrossed with the characters.

When I first heard about this series which was a few months back, I wasn't too sure about reading them because I had seen loads of reviews some saying they loved the series and then some saying no just another Twilight band wagon sort of story..And Then I saw that City of Bones is actually being made into a movie right now and saw the trailer and thought it looked good and I thought you know what, I am going to try the books and I can only see can't I? Well guess what? Im here to prove now I loved them and I am now totally on the Mortal Instruments Jace/Clary band wagon now..sorry peeps!

All the characters in this book were written so perfectly and had me liking them all so much and I thought they all merged great for the story. Cassandra certainly knew what she was doing writing this series! I wished i had my very own Jace. I think all the characters kicked ass a little bit and I feel like they jumped out of the book and felt as though they dragged me in the book with them. The shadowhunters come across as very super sexy and dangerous.

It was a fab read and I had it finished in a couple of days and was straight onto the next series! I do think if your a fan of vampires,werewolves and other things then this book series is going to be for you. I do suggest if your not sure though about buying..then try renting from your local library first.
Posted by missbookworm22 at 20:31