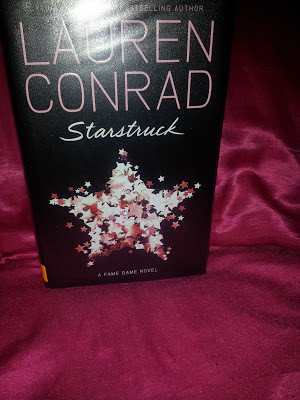 Are they ready for their close-ups?

Madison Parker has discovered that not all publicity is good publicity. After turning herself in for stealing some bling, she's stuck doing some community service while her Fame Game costars soak up all the screen time. Not that newcomer Kate Hayes needs more attention ever since her breakout song became an overnight sensation she's suddenly acting like she's Katy Perry.
Aspiring actress Carmen Curtis is finally making a name for herself, but she's finding it harder than ever to get out from behind famous mother's shadow. And don't even get these reality stars started on their love lives. In Hollywood, leading men are a dime a dozen, but a good man is hard to find. So, when two of the girls have their eye on the same guy, that can mean only one thing: on-camera drama.
As their fortunes rise and fall, Madison,Carmen and Kate will have to prove they have what it takes to stay in the fame game.

From Lauren Conrad, the #1 New York Times bestselling author of the L.A Candy series, comes a story of the complicated lives of TV's newest reality stars told with humor, heart, and a unique insight into Hollywood life both on- and off camera.

Lauren Conrad is my idol and I have loved other books that she has published, they were great reads indeed! Her first set of Novels were the L.A Candy Novels and they were brilliant! When I first found out Lauren was going to do another set of Novels where it is from another of the character's side of things I couldn't wait to grab a copy. This book is the 2nd book in the A Fame Game Novel Series!

We Meet the oh soo wonderful but snobby Madison Parker who if you read the last Series, You will know she turned herself in for stealing some bling however with a secret behind all that, she has to suffer by doing community service while her Fame Game costars soak up all the screen time. We have Newcomers Kate Hayes and Carmen Curtis who are new to the Fame Game, Kate Hayes being the singer who wants attention and to break free her singing career. Carmen Curtis is an aspiring actress who takes after her famous mother and is always lurking behind her shadow but wants to shine for herself and be known on her own not for being her Mother's daughter. We also meet Gaby Garcia who was also featured in the L.A Candy series, she is a bit of a wild party animal who is a complete and utter blonde who doesn't think before she speaks... All the girls are on a new reality tv show called The Fame Game owned by Trevor who has camera crew falling each of the girls and setting scenes...

I loved this book ever so much! It had me giggling straight away, I kept thinking how it compared to The Hills's when Lauren Conrad was on there. I loved all the characters in this book, I would say my favourite character would be Kate Hayes as she is just a bit of a quiet normal girl who just wants to be heard through music and let people love her music.

I loved the flow of the writing, all the chapters just flowed so easily and you could quickly follow each character in each chapter without getting confused.
This book is a definitely a must read and you will love these books i am telling you all! You must all grab a copy right now! If you love romance, drama, tears and friendships then this book is for you!

Here Are The Fame Game Novel Series
Posted by missbookworm22 at 18:01