The Girl You Left Behind By JoJo Moyes 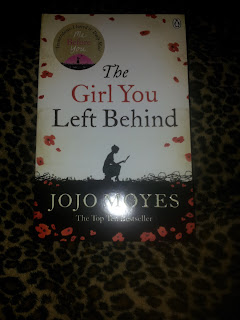 What happened to the girl you left behind?

in 1916 French artist Edouard Lefevre leaves his wife Sophie to fight at the front. When her town falls into German hands, his portrait of Sophie stirs the heart of the local Kommandant and causes her to risk everything her family, reputation and life - in the hope of seeing her true love one last time.

Nearly a century later and Sophie's portrait is given to Liv by her young husband shortly before his sudden death. Its beauty speaks of their short life together, but when the paintings dark and passion-torn history is revealed, Liv discovers that first spark of love she has felt since she lost him is threatened...

In The Girl You Left Behind two young women, separated by a century, are united in their determination to fight for the thing they love most - whatever the cost.

JoJo Moyes is one of my top best authors and first book i ever read was Me Before You and That was splendid so I knew I wasn't going to be disappointed with this new read and I certainly wasn't, I definitely enjoyed this book so much, it pulled at my heart strings a couple of times and I really did get into the characters aswell, I had read her short e-read of Honeymoon In Paris which was about Sophie,Edouard,Liv and David so in this book I warmed up quickly again with the characters and feeling like I was in the same boat as them and wanted to help them. I really loved the front cover of the book, it stood out so well on the shelves and I grabbed my copy so quick hehe.It was a pretty cover and I knew straight away it was a JoJo Moyes book!

We meet two women a century apart, both women determinated to fight for the thing they love the most,
Sophie who is married to a french artist Edouard Lefevre but he leaves her behind to look after her sister,brother and the rest of the family while he goes out to the front line, The Germans take over in her local town but Sophie soon stirs trouble with the local German Kommandant over the painting of herself which her husband had painted...
A century later, Liv was given the painting by her young husband David for their wedding present who then suddenly dies leaving Liv alone and no one really to turn to until she meets Paul in a bar..but her life is soon to take a down turn...

I absolutely adored this book right from the start, JoJo definitely knew how to write this and make it tug at your heart all the way through, the book gets split in two, first reading Sophie's side and what happened in 1916 and how the Germans took over her town and quickly leaving Sophie feeling very alone when the whole town suddenly turn on her when one silly mistake she decides.
The second half of the book is Liv's side and reading all about the trial of the painting, meeting paul and suddenly being left by her husband so suddenly.

I really did enjoy reading, I must say my favourite character would have to be Sophie, I definitely felt very warm to her and did at times feel helpless for her and wished she could of gone a different path. Sophie is definitely the heroine in this book in my eyes even though I did love Liv's character too I just thought Sophie's story was more thrilling and more heartbreaking.

I thoroughly enjoyed this book and I recommend anyone to read The Girl You Left Behind but also other books by JoJo Moyes, You won't be disappointed!