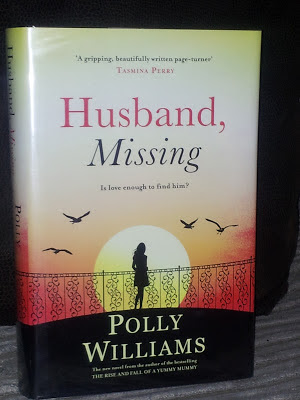 "The number you are calling is unavailable. Please try again later." Gina has only been married six months when her husband Rex goes on holiday to Spain and vanishes without a trace, tipping her dream new marriage into a nightmare. As a frantic search gets nowhere, Gina is adamant that he's alive and vows never to give up hope. Speculation is rife: he's drowned at sea, lost his memory...or just walked away.

Troubling stories start to emerge about Rex's past that are hard to square with the man she married. How well does she really know her handsome, charismatic husband? They'd fallen in love so quickly, so passionately, that the past had seemed barely relevant to either of them. Now an explosive secret threatens to rewrite the story of their love affair. As the mystery of Rex's whereabouts deepens, Gina begins to wonder whether you only ever truly know the person you love once they've gone.

Firstly when I first saw this book cover I fell in love straight away, It just stood out straight away and I knew I had to read even though I had a feeling I would probably cry. This being my first book that I have read of Polly Williams I totally didn't know what to expect and I wasn't going to judge before even starting..

It was a superb read, Yes it did bring a tear to my eyes because having gone through a similar experience a few years ago I knew how heartbreaking it can be, I was just praying that Gina would find her husband Rex again, but I had a funny feeling some secrets were going to come out in which Gina would probably not like but she needed to hear them, the closeness she became with Rex's brother Jake was just amazing and how they bonded while trying to find Rex was great! I had a niggling feeling that something could happen between them..but I will let you readers decide...

You follow the journey with Gina on her searching for her husband but at the beginning of Rex going missing, she finds out she's pregnant, so trying not to worry and put stress on the baby while searching for Rex was going to be hard for her at all times but she had the closeness of her best friends Femi and Lucy and her family to help cheer her up.

This book is certainly one to read this year, while reading I just never knew what was going to happen, whether Rex was going to appear back home or not, it does have sadness but also happiness in which Jake, Femi & Lucy keep Gina sane and help her journey along the way.
A must read!
Posted by missbookworm22 at 17:52