The Idea of Him by Holly Peterson Blog Tour: Extract & Competition 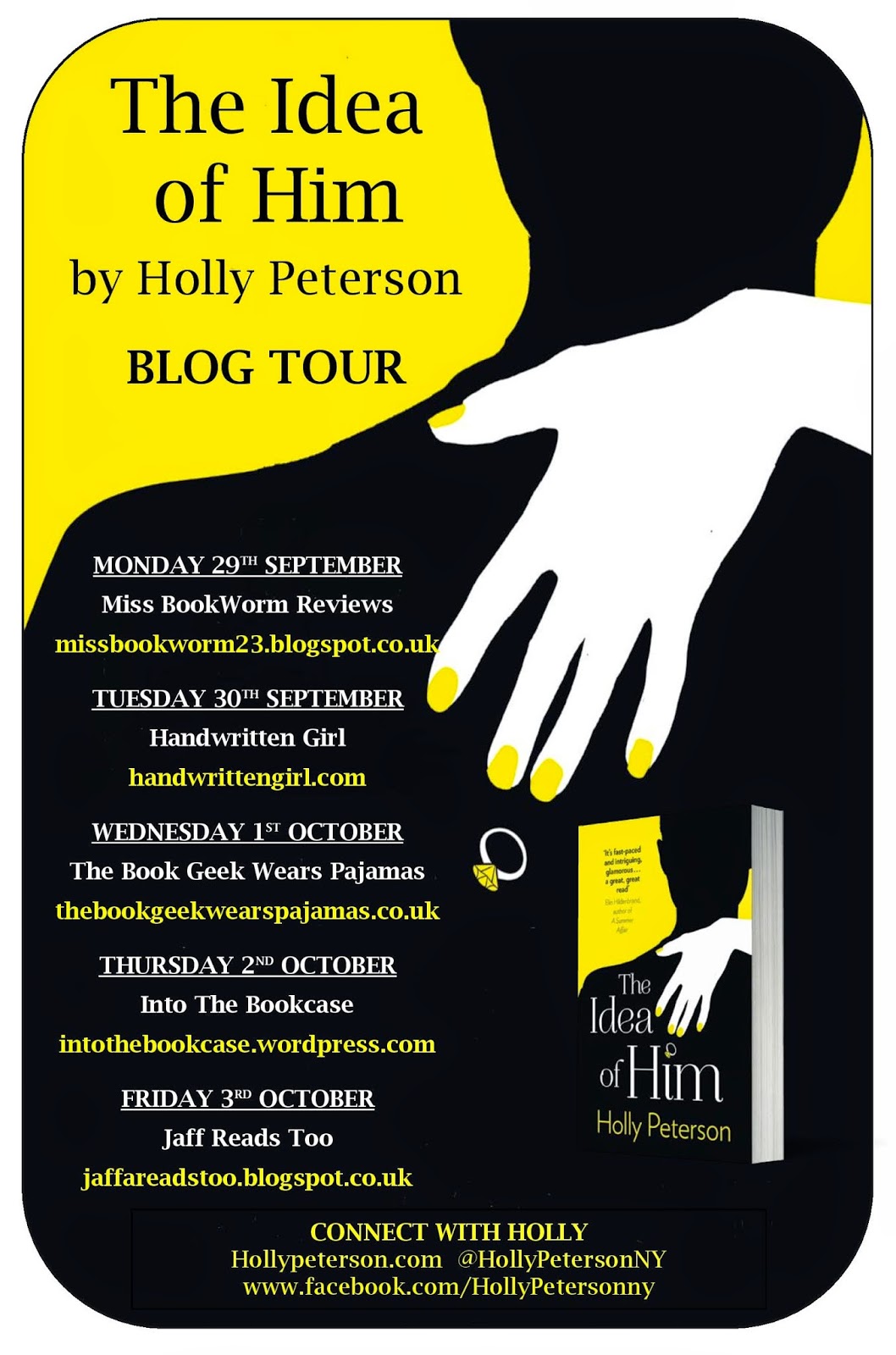 Kicking off the blog tour for The Idea of Him by Holly Peterson is me with a lovely extract from the book. Enjoy!
Book Extract
1

The taxi driver took off down Seventh Avenue as if he’d just mainlined a pound of crystal meth. This guy was on a kamikaze mission, reckless even by New York standards where taxi drivers charge down the streets with no regard for their passengers’ lives.
“Slow down, sir, please!” I yelled through the opening in the glass partition as I contemplated ditching this driver at the next corner.
He slammed on his brakes. “Okay, lady! I’ll slow it down a little. Yeah.” But when the light turned green, he began weaving between cars and playing chicken to blow past the giant city buses. We brushed a bike messenger who retaliated with a fisted punch on the trunk. I again waffled about getting out, but it was that bustling time of early rush hour just before the taxi shift change, when I wouldn’t be able to get another, so I stayed put and latched my seat belt. Besides, my kids were waiting for me at home, and I was already half an hour late leaving the office.

I sat strapped in the ratty backseat, tossed back and forth down the length of Manhattan’s Seventh Avenue like a Ping- Pong ball.
This car is going to crash.
The lethal night of the plane accident came back to me in waves, starting with the instinctual pangs telling me not to step up from the tarmac onto the slippery, rickety staircase of the little six- seater. This plane is not made for all this stormy snow, I had said to myself that night. And I was right.
So much of my life had gone according to plan since then, much of it mapped out in a two- decades’- long fit to fix wrongs— the most evil happening on the eve of my sixteenth birthday that winter night, eighteen-years and four-months ago.
my father had been planning the trip all year. He had told
Mom it was his chance to spend a few days one- on- one with his only child, teaching me the secrets of ice fishing at his favorite spot on Diamond Lake up north. He’d been talking about this as long as I could remember, and, finally, a week before my six-teenth birthday, Mom said I was old enough to go.


Dad had handed in his boarding pass outside, and he came onto the small commuter plane in Montreal, dusting snow off his beard and shoulders once he managed to jam his huge frame into the seat. I knew Dad saw the fear in my face and tried his best to reassure me. All I could think about was how small and fragile that plane seemed against the howling winds outside. Deep down that voice was telling me this was a bad idea, but I kept my mouth shut at first. I didn’t want to look like a frightened little girl.

Dad smelled of metal and cold air, a scent that further unset-tled me because it was so far from his usual salty warmth. I rubbed his arm to chase away the odor and he smiled down at me.
On the plane, I thought danger was nearby but I didn’t want to scare anybody. Others have certainly had that same feeling before they board a plane with severe weather forecast in the flight path, wondering if they should resist getting on because this could be the one that goes down. A moment’s hesitation before they step over that little gap and feel the rush of cold out-side air between the boarding ramp and the aircraft front galley. Is my mind playing tricks or do I somehow know this plane is going down? Am I having some kind of psychic experience? Am I going to be on the local news as the one person who survived only because I didn’t get on at the last minute?

The whole body stiffens on the ramp for a moment to stall and consider the possibility.
But then, No. That’s ridiculous. Screw it. I’m getting on. Statis-tics say it is more dangerous to drive to the airport than to get on this plane.
At least most often it goes like that. I guess you don’t need to be clairvoyant to know that during a blizzard, when a lumber-jack pilot in a plaid shirt working for a low- budget commuter airline in Canada’s outback says, “It’s just a little snow,” you get out of the twin- engine Cessna and run for your life.
my plan since then has been to run for my life. Run away from a boyfriend who kept traveling too far, run into a marriage that I thought would work. Rush to have kids to cement the
union. Rush home to them today. This plan means I’ve tried to solve everything quickly before all hell descended on me again. Trauma is like that. It smashes into your life out of the blue and just lingers, dripping like a broken egg.
The kamikaze taxi lurched me back into the New York pres-ent, and the frayed seat belt snapped into place, jerking me hard. “Please slow down, sir,” I yelled again at the driver. “That light was clearly turning red, and you were never going to make it, so you don’t need to speed up just to slam the brakes.”
“Okay, lady. Thanks for the driving tip. All I need at the end of my shift.” This time he took off two full seconds before the light even turned green. I clenched my teeth and again started to feel that old tingle I’d felt in my bones as the pilot had swung the plane out of the boarding area some eighteen years earlier.

a Rafflecopter giveaway
Posted by missbookworm22 at 21:33