Book Review: Baby Be Mine(Johnny Be Good#2) by Paige Toon 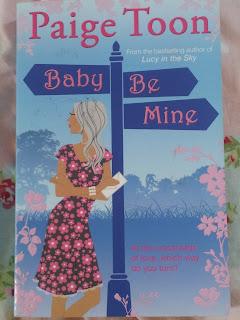 'He's not mine, is he?' That's the question I fear the most. You see, I have a secret. My son is not fathered by my boyfriend, but by one of the most famous people that ever lived. And he doesn't even know it.

One-time celebrity personal assistant to wild boy of rock Johnny Jefferson, Meg Stiles is now settled and living in the south of France with her doting boyfriend Christian and son Barney. But they're living a lie - a lie that will turn their lives upside down and inside out. Because Meg's son doesn't look like Christian, he looks like his rock star father and, sooner or later, the world is going to realize ...

The anticipating sequel to Johnny Be Good and Boy this is amazing! For huge fans of Paige Toon's book who loved Johnny Be Good were automatically going to love Baby Be Mine for sure. I had literally just finished Johnny be good and Started Baby be mine straight away and I was hooked by the first couple of chapters.

So we have already Meg Stiles who was celebrity personal assistant to rocker boy Johnny Jefferson but is now settled and living in France with her loving boyfriend Christian (Best friend to Jefferson) and son Barney, But Meg is living a huge guilty lie that could ruin everything perfect in their lives....The shock is that Barney is actually the rock star Johnny Jefferson's baby really not Christian's...what will happen?\

Well this was an explosive sequel, I adored every single minute of it, I was on the edge of my seat reading wondering what was going to happen with Meg, Johnny, Christian & Barney. The was plenty of action/drama going on in this book..especially when Johnny finds out tehe, well that was a bombshell that you knew was going to happen in the book..but was just a question of when!?!

I don't want to say anymore of the storyline because I feel readers should read for themselves, just that is an explosive read that you won't want to miss!

For anyone who hasn't read any of Paige Toon's books before, you must start doing now! Because you are never going to be disappointed with her books, they are always superb and have plenty of emotion & stay in your mind for years to come.
Posted by missbookworm22 at 21:07