Book Review: The Book Of You by Claire Kendal 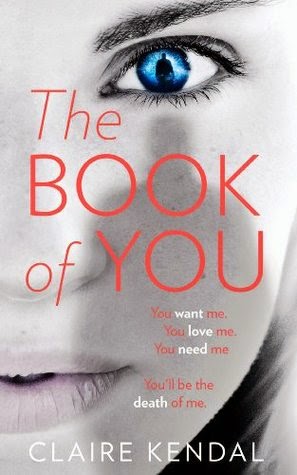 The Book of you is about a lady called Clarissa who is being stalked by a work colleague called Rafe, he won't leave her alone, everywhere she turns he's there, he leaves her gifts and most certainly won't take no for answer. When Clarissa get's to be part of Jury service, she finally feels safe for a while...but for how long?

There is no words to describe how hooked I was with this book and how I was really worried for Clarissa and what Rafe was going to do to her.

This is Claire Kendal's debut novel and what a superb way to get noticed! The Book of You is just thrilling that your looking behind yourself just like Clarissa is doing.
Clarissa is a 38 year old English woman who takes up with a distant coworker one night at a little party after his book is published and something dark happens that changes her life in every way. This guy, Rafe, stalks her every move and she becomes like a prisoner in her own life. He's everywhere. Her house, her work, the park...and he leaves lots of notes and gifts for her.


I liked the style of writing Claire has done, the way we flick between the "book" all about Rafe and his ways of stalking following instructions from a leaflet about Domestic abuse telling her to write everything down so that what she does. To present day but she doesn't get much of present day until she is that court being part of Jury service.
The question is when will Rafe get the picture that Clarissa isn't interested..maybe when it's too late? as Clarissa is writing in the journal every day she see's him and the unwanted gifts she keeps tucked away so when the time comes to go straight to the police that they will listen to her and there will be plenty of evidence... the only place Clarissa feels safe is in the Court House and when she gets to know the other people part of Jury service, she become's friendly with a guy called Robert but becoming more than friends with Robert angers Rafe and isn't a good thing!
The Book of You is one gripping and scary book! for fan's who love to read a good psychological thriller then you will love this!
You may not sleep without wanting to keep the light on but it'll be worth it!
5 page turning stars!