Honeymoon In Paris A Novella By Jojo Moyes 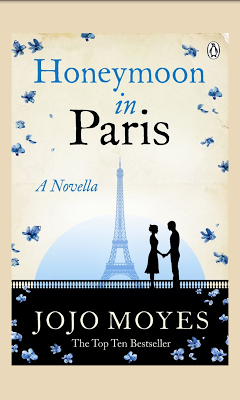 Honeymoon In Paris takes places several years before the events to come in The Girl You Left Behind when both couples have just married. Sophie, a provincial girl, is swept up in the glamour of Belle Poque Paris but discovers that loving a feted artist like Edouard brings undreamt of complications.

Following in Sophie's footsteps a hundred years later, Liv, after a whirl wind romance, finds her Parisian honeymoon is not quite the romantic getaway she had been hoping for...

This was a fab short story of 2 women who are both on their honeymoon's, one in the first world war and the other nearly a century later...This is a perfect prequel before starting on The Girl You Left Behind..it will warm you up to the characters Sophie,Edouard,Liv and David. You will more than likely cry so be ready and have some tissues hehe!

I did wish this could of been a little bit longer but it was good to get some background information on all the characters before I started The Girl You Left Behind. It did leave me rushing to find TGYLB very quickly so I could jump back into their lives once again.

The only shame with this story, is it is only on e-read but I would recommend any one to get The Girl You Left Behind and even try and grab a copy of this you will soon warm up more to the characters a lot easily.

Kindle
Posted by missbookworm22 at 18:57