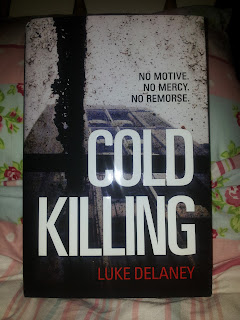 DI Sean Corrigan is not like other detectives . The terrible abuse he suffered in childhood hasn't stopped him enjoying family life with his wife and two daughters, or pursuing an impressive career with South London's Murder Investigation Unit. But it has left him with an uncanny ability to identify the darkness in others - a darkness he recognises still exists deep within his own psyche and battles to keep buried there.

Now Sean's on the trail of the most dangerous killer he's ever encountered. The perpetrator has no recognisable MO, leaves no forensic evidence and his victims have nothing in common. But Sean knows they were all murdered by the same man.Now all he has to do is find the evidence, convince his bosses and stop the killing....before his adversary gets too close to home....

Firstly I have Hannah Gammon at HarperCollins Killer Reads to thank for my copy of this book and being introduced to it, I am very grateful for that. Luke Delaney is a new author on the crime/thriller block right now, His first debut book Cold Killing, Luke is an Ex Met Police officer so he has his own insight of scenes that he has seen and crimes he has sorted which meant this book could be brilliant!

This Book Cold Killing we meet DI Sean Corrigan a married man with two daughters but deep down he has a haunted childhood where he was abused so being a police officer he has the ability to see the scenes from the killers point of view. Now He has his hands full with this new case a serial killer, several people murdered but no trace of evidence left behind..this killer is very clever..but for how long?

I am so happy I got to read this book, I am such a big fan of crime/thriller books and when I got my copy of Cold Killing, it had similar feelings to Mark Billingham DI Thorne series which I loved so I had a feeling I was going to like this book, and Boy I wasn't wrong. . .

This is a fast pace book with plenty of action going on leaving you very hooked and trying to figure who the killer is as each chapter comes along and a new puzzle comes in the case. People who love crime/thriller books are going to love this book, the good news as well is it is a new series, so DI Corrigan is going to back..tehe!
I urge you all to buy this book, you will be mad not to!